Luxembourg was in the limelight at the Korea Space Forum, the first conference in Northeast Asia devoted entirely to the emergence of the commercial space industry. Entitled “Open Space Era, from Idea to Reality”, the event aimed at exploring the economic possibilities of space. With its innovative policies and legal framework for the exploration and use of space resources, Luxembourg stands out in this field on the international level. 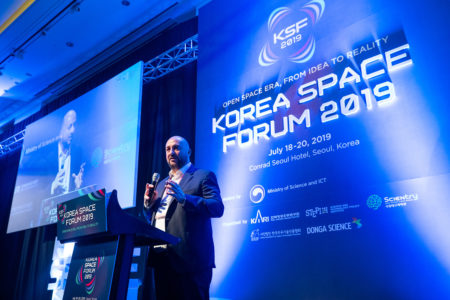 a commercial space economy focused mainly on the exploration and use of space resources,” Minister Schneider said. “The Grand Duchy is the first European country to introduce legislation recognising that private companies can own space resources. To ensure a continuous and coherent development of the international space sector, it is now essential for Luxembourg to exchange with other countries that have similar objectives.”

It is now essential for Luxembourg to exchange with other countries that have similar objectives.

In a  meeting during the last day of the economic mission with You Young-min, the Republic of Korea’s Minister of Science and ICT, Étienne Schneider highlighted recent developments in the Luxembourg space sector with its SpacResources.lu initiative and the activities of the Luxembourg Space Agency.