The economy of South Korea is the fourth largest economy in Asia and the 11th largest in the world. The country is a global leader in fields such as consumer electronics, mobile broadband and smartphones. With its top-level digital infrastructure and strategic projects to advance its digital economy, Luxembourg is an interesting location for Korean start-ups and companies that are looking for a base to expand their business in the European market.

Mutual exchanges with a state-of-the-art country such as South Korea help Luxembourg to consolidate its position as a precursor in digital innovation in Europe.

On 15-18 July 2019, Deputy Prime Minister and Minister of the Economy Étienne Schneider is heading an economic mission to South Korea with the aim of exploring synergies between the two countries. “In recent years, the Republic of Korea and Luxembourg have evolved towards a high-tech economy. Mutual exchanges with a state-of-the-art country such as South Korea help Luxembourg to consolidate its position as a precursor in digital innovation in Europe,” Minister Schneider stated during the visit. 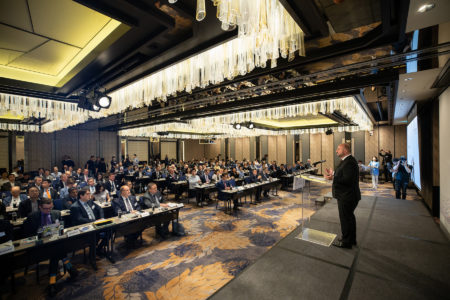 As the management, analysis and storing of data is a key issue for digital economy companies, the mission included a seminar on 16 July on Luxembourg’s digital ecosystem. Nearly 200 representatives of Korean companies joined the seminar organised by the Ministry of the Economy, Luxinnovation, the Chamber of Commerce and the Luxembourg Trade and Investment Office in Seoul.

Topics discussed during the seminar included cybersecurity in the context of Luxembourg’s data-driven innovation strategy for the emergence of a sustainable and trustworthy data economy, as well as the implementation in Luxembourg of a high performance supercomputer at the service of companies and research. Participants got an overview of the country’s excellent national and international connectivity that enables its high-level capacities of data transmission. The impact of digitalisation on logistics and supply chains was also on the agenda.

Data protection and the provision of reliable systems for digital identification is crucial for the successful development of the digital economy. LuxTrust, a leading digital trust services provider in Luxembourg, and Cambridge Blockchain, a pioneer in digital identity enterprise software, took the opportunity presented by the seminar in Seoul to announced the beta-testing phase of the privacy-protecting European identity platform IDKEEP.

Designed to resolve identity and personal-data related challenges faced by many digital service providers — such as banks and financial services, insurance, and healthcare, among others— IDKEEP is a huge step forward towards data ownership and control. The platform provides end-users with full control over personal data and over sharing such data with services online, helping digital organisations to effectively manage consent as per GDPR rules and manage validated users’ data, enabling trusted transactions online.  In addition, IDKEEP opens a marketplace for data validators who can leverage a network effect of a large customer base, realising efficiencies and re-use of expensive data validation processes.

The access to tools such as IDKEEP is very useful for companies that are developing new or enhanced digital services, Luxembourg’s openness to trialing new digital solutions as well as its strategic geographical location and multinational population makes it a relevant testbed for many countries that want to optimise their offering for the EU market. “We can proudly say that Luxembourg represents, on a small scale, the best of Europe,” said Carlo Thelen, the director of the Chamber of Commerce. “In this sense, our country is also a true European laboratory and a gateway to Europe as a whole.”

Our country is also a true European laboratory and a gateway to Europe as a whole.