The picturesque village of Clervaux is nestled in the Ardennes mountains in the north of Luxembourg. The castle is located in its very centre. With its 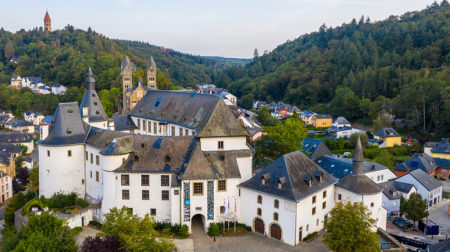 oldest parts dating back to the 12th century, it now houses the offices of local government, the local tourist office and a marvellous collection of models of Luxembourg’s fortified castles.

The castle is also home to the Museum of the Battle of the Bulge, which exhibits weapons and souvenirs from the 1944-45 Ardennes offensive. However, it is most known for hosting a remarkable collection of documentary art photography, the “Family of Man” by Edward Steichen. The collection consists of 503 pictures by 273 photographers from 68 countries in an impressive setting of 37 themes, based on love and faith in man, depicting birth, work, family, education, children, war and peace, and so on.