ESAIL was one of 53 satellites on Arianespace’s rideshare adapter for Small Satellites Mission Service and was deployed into a Sun-synchronous orbit at an altitude of more than 500 km. ESAIL will track ships worldwide by detecting messages that ships radio-broadcast with their automatic identification systems (AIS). 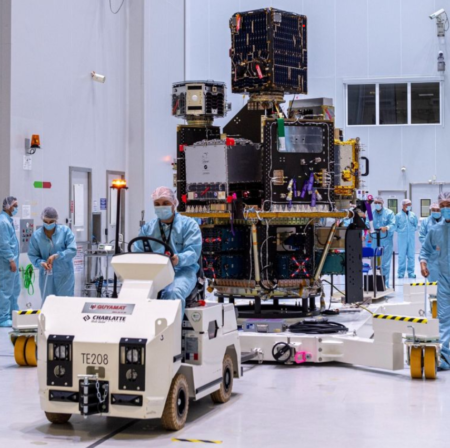 ESAIL was developed in an ESA Partnership Project with LuxSpace and ExactEarth as part of ESA’s SAT-AIS programme. ESAIL is the third AIS satellite for LuxSpace – but also the largest so far. The company is currently developing a multi‐purpose, modular platform called Triton‐X. This platform will build on the manufacturing and testing heritage gained by LuxSpace through ESAIL, using off-the-shelf components to deliver a fully-fledged satellite within months.

“ESAIL is a major milestone for us,” said Jochen Harms, Managing Director at LuxSpace. “It enabled us to build and integrate a sophisticated microsatellite using commercial off-the-shelf components, which reduced the time for testing and launch qualification. The emerged synergies paved our way towards commercial space. We have gained valuable experience and knowledge through ESAIL, which serve as inputs for the Triton‐X platform.”

“As a European leader in commercial space, Luxembourg is following a unique space strategy focused on creating an attractive ecosystem for NewSpace companies and innovative space entrepreneurs,” commented Marc Serres, CEO of the Luxembourg Space Agency. “This maritime microsatellite built in Luxembourg by our major system integrator LuxSpace, in partnership with ESA, demonstrates how a private company and ESA can work closely together to develop a new commercial product.”

Peter Mabson, chief executive of exactEarth, pointed out that the capabilities of ESAIL will allow exactEarth to continue to advance the state-of-the-art in maritime vessel tracking and data services. “I would like to thank ESA and LuxSpace and their satellite manufacturing team for their accomplishments in producing this cutting-edge microsatellite,” he said.